Hope Is the Thing
with Feathers

FROM CHRISTOPHER: Hope Is the Thing With Feathers is a setting of Emily Dickinson's poem by the same name and borrows a melody from a string orchestra piece of mine called “Flocks a Mile Wide,” originally composed as the score for director Deborah Dickson's documentary The Lost Bird Project. Like the film that the source piece was composed for, Hope Is the Thing With Feathers is a meditation on the fragility of nature, as well as our own hand in its destruction. Its elegiac tone lends itself to occasions of honoring and remembrance; but deep within its downy melodic layers beats a warm heart of hope, like the song of a small bird in a storm. 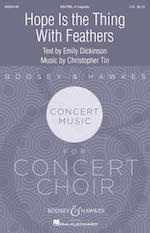