Program Notes: "Iza Ngomso" is the fourth movement of The Drop That Contained the Sea, and like the rest of the movements, is based on water in one of its unique naturally occuring states. In the case of "Iza Ngomso", a piece about clouds, the text is derived from an unusual translation of the Henry Wadsworth Longfellow poem "Kerabos": translated into Xhosa, one of the national languages of South Africa (and one of the African dialects that features prominent 'click' sounds).

FROM CHRISTOPHER: "I wrote Iza Ngomso on an airplane, en route from Dubai to Johannesburg. I was inspired by the sight of the airplane's shadow skipping across the cloud layer." 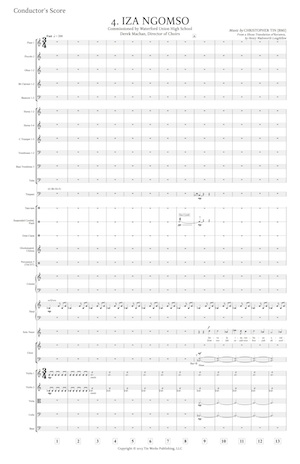 Score and Parts
Orchestration from the album