FROM CHRISTOPHER: "Nocturne" was inspired by the poem "I Love Thee" by Eliza Acton (1799-1859). Although best known as a pioneering cookbook author in Victorian England, she also wrote expressive lyrical poetry: conjuring wistful and evocative imagery through uncomplicated means. On the surface her poem is a celebration of all things nocturnal and beautiful: starlight, the smell of jasmine, a lonely songbird heralding the close of day. What makes it particularly potent, however, is the undercurrent of intimacy that, because of the restraint expected of Victorian women, had to be deflected through metaphor. These intense longings are heightened by the poem's nocturnal setting, which transports us to the deepest hours of the night, when our passions are at their highest. My "Nocturne" is thus a musical translation of her poem--an evocation of our heightened sense of romance in those evening hours.

History: "Nocturne" was originally composed for the 2006 independent film 'The Insatiable', directed by Cary Solomon and Chuck Konzelman and starring Sean Patrick Flanery, Michael Biehn, and Charlotte Ayanna. The piece plays twice in the film: first during a scene when Ayanna's character Tatiana recites the Eliza Acton poem, and again over the closing credits. Originally titled 'Nocturne No. 2', the track was restricted from having a proper commercial release until Wei Luo recorded it in 2021 for World Sleep Day. 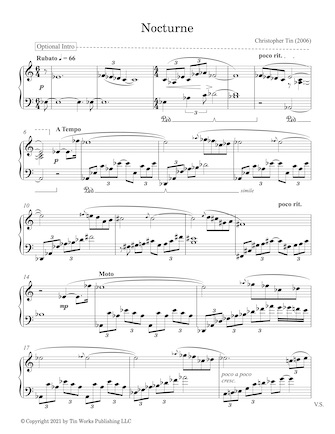