Program Notes: "Shinobu vs. The Ghost Warrior" was composed as part of a series of crossover works commissioned by the St. Matthews Music Guild that explore the intersection between western classical music and the music of various world cultures. Tin's previous effort for the series, "Waloyo Yamoni" is based on an African rain-making litany and is to be heard on the orchestra's CD, "Music from the Left Coast." "Shinobu vs. The Ghost Warrior" plays on traditional Japanese flute techniques as well as anime culture in the form of music for video games. The work features flute and piccolo soloists and chamber orchestra with an Japanese percussion. "Shinobu vs. The Ghost Warrior" was commissioned by the Music Guild with support from the Los Angeles County Board of Supervisors and the LA County Arts Commission and many Music Guild Subscribers.

FROM CHRISTOPHER:When I was approached to write a piece for two flutes that combined Western orchestral music with non-Western traditions, my mind immediately went to the Japanese fue (flute) sound. The two soloist parts thereby integrate traditional Japanese flute articulations and extended techniques you'd typically hear with instruments like the shakuhachi. Riffing off the concept of East-meets-West, however, I decided to structure the piece like a duel between the two soloists. And taking it a step further, I staged it in the format of a classic 'fighting' video game; where a short introduction introduces the two contestants, who then proceed to duel it out. The name of the piece is a play on a few tropes from anime and video game culture; in fact, 'Shinobu' is a play on both the words 'Shinobue' ("flute") as well as 'Shinobi' (meaning "ninja", but also a reference to the classic Sega arcade game of the same name). 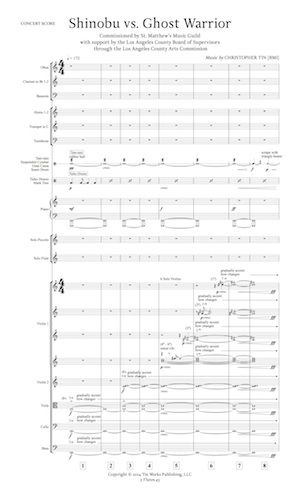