Program Notes: The Bulgarian female vocal tradition originated in the fields as songs that women would sing with one another while doing manual labor. Much of it was non-metrical and free flowing, and relied on ornamentation. Common devices included descending melodic patterns and held-out dissonant notes. Geographically speaking, Bulgaria being a mountainous country led to isolated pockets of folk music that were often took on the tonalities of their neighbors: some regions, like the West, took on conventional tonalities while the East adopted the more complex microtonality of Turkish maqams. It was only after the Soviets occupied Bulgaria that a lot of the music was arranged in more modernist Western styles, as a form of cultural preservation.

Regarding the Text: Hristo Botev was one of Bulgaria's most famous revolutionary poets. "Dark Clouds" uses a common image found in Bulgarian literature, and seen throughout the country--huge, ominous rainclouds, often used as a poetic device to symbolize oppression. The setting of the forest is significant as well; the woods were where revolutionaries went to hide.

FROM CHRISTOPHER: "Temen Oblak" is based on traditional Bulgarian melodic shapes, but in the modernist style made popular by Le Mystere des Voix Bulgares. It features intricate passing of rhythmic material between voices, tone clusters, unusual ornaments and a strident singing style. 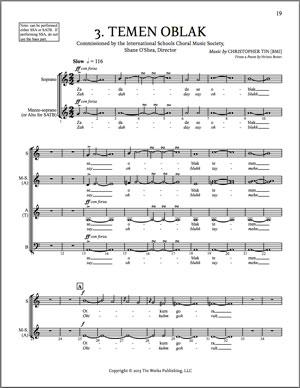 Vocal Score
Note: the same score can be used either as an SSA arrangement, or SATB
Edition is currently in pre-production with Hal Leonard; inquire with Boosey in the meantime