PROGRAM NOTES:"The Saddest Noise" is a setting of Emily Dickinson's poem "The Saddest Noise, the Sweetest Noise". It begins the story of The Lost Birds in spring: the season of birth and renewal, and a time of year when bird songs flood the skies. But what is ordinarily a joyous sound is now riddled with sorrow, as the songs of the remaining birds remind us of the ones we've already lost.

Dickinson's reflections on the birds' songs--at once tuneful, but tainted with melancholy--inspired my musical language for The Lost Birds. Heavily influenced by the vernacular of the 19th-century, the work is both pastoral and romantic, with lyrical melodies and soaring strings. But for all its romanticism and loveliness, there remains a sense of loss that permeates the music: for though the melodies we can still hear are sweet, it is the ones that are lost which we truly wish to hear. 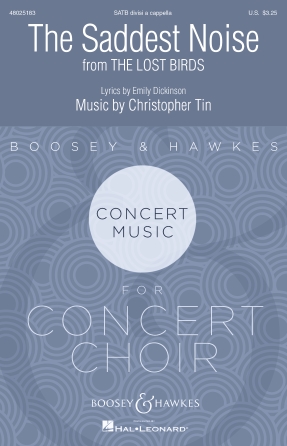